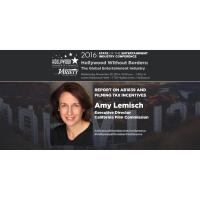 The Hollywood Chamber of Commerce announced that Amy Lemisch will be providing an update on the AB1839 and the future of filming in California at the 2016 State of the Entertainment Industry Conference presented by the Hollywood Chamber of Commerce and Variety. The conference is the pre-eminent local forum that focuses on the importance of the Entertainment Industry to California and steps that need to be taken to keep it healthy.

The conference includes a packed program and will be held at Loews Hollywood Hotel on Wednesday, November 30th. Registration will begin at 8:30 a.m. with the sessions running from 9:15 a.m. to 1:30 p.m.

The spotlight conversation will be held between Amy Lemisch, Executive Director of the California Film Commission and Paul Audley, President of FilmL.A., Inc., on the successful rollout of the State’s AB 1839 and the future of film tax incentives and credit program. AB 1839 (Gatto-Bocanegra) created a 5-year program in July 2015 which extends through June 30, 2020. The bill allocated $230-million in its first year and $330-million in each of the following four fiscal years. The California Film Commission awards tax credits to those productions in each category with the highest jobs ratio.

As Executive Director of the California Film Commission, Lemisch oversees all of the State's efforts to facilitate motion picture, television and commercial production. She was appointed by Governor Arnold Schwarzenegger in May 2004, and reappointed by Governor Edmund G. Brown Jr. Under her leadership, the Commission coordinates with all levels of state and local government to promote California as a production locale. Such efforts in-turn create jobs, increase production spending and generate tax revenues.

In addition to overseeing the Commission’s wide range of support services, Lemisch also serves as the state’s leading advocate for educating legislators, production industry decision makers and the public at large about the value of filming in California.

Among her many accomplishments, Lemisch was instrumental in the creation, passage and implementation of the California Film & Television Tax Credit Program, which was enacted in 2009 to help curb runaway production. The Commission is charged with administering the program that targets the types of productions most likely to leave California due to incentives offered in other states and countries.

Prior to her appointment at the Commission, Lemisch served for more than 15 years as a producer for Penny Marshall’s company - Parkway Productions. While based at Universal Studios and Sony Pictures, she was responsible for overseeing physical production on all Parkway projects, as well as selecting new projects for the company to produce. Her credits include: producer on the independent feature film “With Friends Like These;” co-producer on “Riding In Cars With Boys” starring Drew Barrymore; “The Preacher’s Wife” starring Denzel Washington and Whitney Houston and “Renaissance Man” starring Danny DeVito; associate producer on “Awakenings,” “A League Of Their Own,” and “Calendar Girl.” She was also associate producer on the television series “A League Of Their Own,” which was adapted from the feature film.

The theme selected for the 2016 conference is “Hollywood Without Borders”. Co-chairs of this year’s conference are Sharon Keyser, Senior VP, Real Estate, Government & Community Relations for Paramount Pictures, and Doug Troy, COO/CFO of Trailer Park. Producer Vin Di Bona will once again Emcee the conference. It will feature messages from public officials and industry experts. Zach Katz of BMG US will highlight the new music company and the state of the industry. Ted Sarandos of Netflix will be recognized with the 2016 Commitment to California Award.