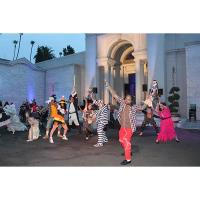 The Hollywood Chamber Community Foundation held recently the popular All Hallow’s Eve Party at Hollywood Forever Cemetery. The ghoulish event was presented by Hollywood Forever where more than 300 guests dressed up in disguise and came along with their little goblins to celebrate the spirits all for a good cause for the community.