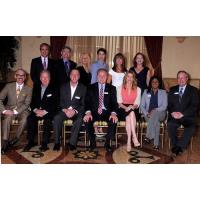 The Hollywood Chamber Community Foundation honored the 2015 Heroes of Hollywood Awards Luncheon at the Taglyan Cultural Complex in May 2015. This year, the Foundation recognized the following Heroes: Christopher Barton of Hudson Pacific Properties, Inc.; Jane Lopez of Trailer Park; FilmL.A., Inc.; and St. Anne’s. During the Awards luncheon, Actress, film director, producer and author Diane Ladd was honored with the Mary Pickford Award. Then Councilmember Tom LaBonge was honored with the Distinguished Service Award in Memory of Johnny Grant. Returning in his role as emcee once again was Robert Kovacik, anchor of NBC4.

Actress Diane Ladd was honored with the Mary Pickford award. Ladd is an internationally acclaimed actress, director, writer and author, winner of 37 awards including the British Academy award and Independent Spirit Award, and is a 3-times Emmy Nominee and a 3-times Oscar Nominee. In 1980, she joined the “Alice,” T.V. show, based on the original film, Diane created the role of a Singing-Songwriter Waitress, Belle, winning the 1981 Golden Globe. Diane co-starred as the mother, “Helen,” with her daughter, Laura Dern, “Amy,” in the HBO rave reviewed series, Enlightened. Her recent film, I Dream Too Much premiered at the SXSW Film Festival. She is currently in Massachusetts co-starring in a new David O. Russell film.

Councilmember Tom LaBonge (CD4) was honored with the Distinguished Service Award in Memory of Johnny Grant. In recognition of his years four decades of service, Los Angeles Magazine in 2009 dubbed him “Mr. Los Angeles.” He counts as one his greatest achievements in office the acquisition of Cahuenga Peak, which saved 138-acres from development and added as open space to Griffith Park. He has also worked tirelessly in support of Los Angeles’s sister city program, maintaining connections with cities all over the world. LaBonge’s ancestors first came to Los Angeles in the 1880s. He currently resides in Silver Lake, with his wife Brigid and their two children, Mary-Cate and Charles.

Christopher J. Barton is the Executive Vice President, Operations & Development at Hudson Pacific Properties, Inc. (HPP), a NYSE-listed real estate investment trust based in Los Angeles. HPP has a market capitalization of $7-billion and owns and manages a commercial office and studio portfolio of over 17-million-sq.ft. Barton manages the company’s property operations and development projects, including its Sunset Gower and Sunset Bronson Studios in Hollywood. He previously served as First Vice President for Arden Realty, Inc. and was responsible for land use planning, project entitlements, financial analysis and construction management. Barton also worked at Beers-Skanska Construction Company, where he managed large-scale construction projects in the southeast United States. Barton holds an MBA in both Real Estate and Finance from the University of Georgia.

Jane Lopez oversees human resources and talent acquisition at Trailer Park, one of the world’s leading entertainment and content marketing agencies. She is passionate about growing the company’s culture and helping employees thrive in their careers. She is also committed to supporting the Hollywood community and leads the agency’s community service efforts with local organizations such as EMQ/Families First & Hollygrove, artworxLA, Dress for Success, and Habitat for Humanity. Jane began her career at Warner Bros. and later headed Human Resources at Sega Entertainment.

FilmL.A., Inc. is the official film office of the City and County of Los Angeles. Providing streamlined permit processing, comprehensive community relations, marketing services, film policy analysis and more to these jurisdictions, FilmL.A. works to attract and retain film production in Greater Los Angeles. Ongoing community relations is a key component of the service FilmL.A. provides. The organization works to strike a balance between the needs and interests of the entertainment industry and the neighborhoods affected by on-location production. FilmL.A.’s services help the Los Angeles region retain its status as the entertainment production capital of the world. Learn more about FilmL.A. at www.filmla.com.

St. Anne’s opened in 1908 as a safe refuge for unwed mothers and has evolved since into one of the most highly-regarded social service agencies in the country. Today, the organization services some of Los Angeles’ most vulnerable children, youth and families. St. Anne’s is one of the only remaining agencies in Los Angeles County committed to a forgotten population – pregnant and parenting young women in the child welfare and juvenile justice systems – and one of the only providers of extended foster care. St. Anne’s offers such comprehensive services as residential treatment care, transitional housing, mental health, early childhood education, family literacy, family preservation, educational and vocational preparation, as well as collaboration with other agencies and providers.