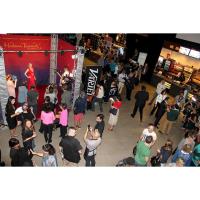 The Hollywood Chamber of Commerce hosted its 13th Annual Awards Media Welcome Center in conjunction with Madame Tussauds and Variety. The exclusive event was held at the TCL Chinese Theatre 6 today, on Thursday, February 25th for local, national and international members of the media accredited by Academy Of Motion Pictures Arts And Sciences.

The event kicked off with a special wax figure unveiling by Madame Tussauds of Oscar® winning actress Kate Winslet to celebrate the spirit of awards season. Presenting sponsor Madame Tussauds Hollywood is Los Angeles’ premiere Hollywood destination offering guests the world’s only opportunity to interact with incredibly lifelike iconic figures from the celebrity worlds of film, TV, music, sports and politics. Also presenting this event is Variety, the entertainment industry’s leading provider of the most comprehensive and in-depth news coverage of the motion picture, television and the digital arenas.

The Media Welcome Center also featured an array of exhibits on Hollywood and interview opportunities from entertainment insiders. “Our exhibitors met with the press and updated them on what’s happening in Hollywood,” said Kaylee Kiecker, Executive Vice President of the Hollywood Chamber of Commerce. “Through interviews that our visiting press compiles and sends out through their newscasts, the world learns more about Hollywood, the entertainment capital of the world,” she added.

The annual event offers an opportunity for the accredited press to meet and interview Academy Awards® insiders, book authors, museum owners, and others, including business, civic leaders as well as Hollywood Walk of Fame insiders and the more than $4-billion revitalization taking place within Hollywood.

Credentialed press offering coverage of the Media Center were presented with a gift bag from M·A·C Cosmetics.

Madame Tussauds Hollywood unveiled the wax figure of Kate Winslet, a current Oscar nominee for Best Performance by an Actress in a Supporting Role for the film Steve Jobs. The Oscar winning actress has earned 7 nominations in the course of her career. Kate Winslet’s figure was dressed in a red replica of the gown she wore to the 2012 London premiere at The Royal Albert Hall of the special limited engagement re-release of the Academy Award winning film Titanic in 3D in theaters to commemorate the 100th anniversary of this historic event. Representatives Storm Velez and Ashlea Tate were on hand to answer questions pertaining to the famous Madame Tussauds Wax Museum and process involved in making a wax figure.

Variety, the entertainment industry’s leading provider of the most comprehensive and in depth news coverage of the motion picture, television and the digital arenas had spokespeople on hand to answer questions on all that is Hollywood Entertainment.

Leron Gubler, President & CEO of the Hollywood Chamber of Commerce, spoke about the history of Hollywood, the current revitalization taking place, and the more than $4-billion worth of investments which are currently in the pipeline for Hollywood. He discussed projects that include hotels, studios, and new tenants moving into Hollywood such as Viacom and Netflix.

Emmy award-winning producer Vin Di Bona, the creator and executive producer of America’s Funniest Home Videos, was on hand to talk about the longest-running primetime entertainment series on ABC currently in its 26th year. A veteran television producer and director, Di Bona is credited with bringing the first Japanese format to the U.S. with “Animal Crack-Ups,” in 1986. He has helmed a variety of reality and non-reality shows including Entertainment Tonight, television movie Trump Unauthorized, MacGyver and Upload with Shaquille O’Neal. His latest television show, Insane Pools… Off The Deep End, is currently in its second year on Animal Planet. Di Bona is the new Chairman of the Walk of Fame selection committee and, as a member of the Hollywood Chamber of Commerce he is committed to the revitalization of Hollywood and keeping Los Angeles the center of film and television production. He was honored with his own star on the Walk of Fame in 2007.

M·A·C provided complimentary makeup applications and grooming at the M·A·C Hollywood & Highland Center for all media. Accredited press were treated to a complimentary gift bag and details regarding makeup services at the Awards Media Welcome Center. Additional make up services ran through 5 p.m. at Hollywood & Highland. M·A·C is the world’s leading professional makeup authority because of their unrivalled expertise in makeup artistry. All Ages, All Races, All Sexes. A professional makeup brand setting trends backstage at fashion weeks around the world. Today, M·A·C means so many things to its millions of fans in every corner of the planet.

Hollywood Walk of Fame Star makers Top End Constructors David Paternostro, Travis Paternostro and Rick Orlando talked about their 30-year history of making the stars on the famed Walk of Fame and brought sample pieces of terrazzo for the media.

Councilmember Mitch O’Farrell of Hollywood’s 13th District was on hand to discuss Hollywood and the latest goings on within the City of the Angels, Los Angeles California. O’Farrell has served the constituents of the 13th Council District for more than a decade. He is passionate about making neighborhoods safer and is working hard improving quality of life in Atwater Village, East Hollywood, Echo Park, Elysian Valley, Glassell Park, Historic Filipinotown, Hollywood, Little Armenia, Mid-Wilshire/Koreatown, and Silver Lake. He is focused on creating opportunities for more affordable housing, reforming City policy to help drive the local economy, and collaborating with the entertainment industry to bring jobs back to Los Angeles where they belong.

Alwyn Hight Kushner, President and C.O.O. of the world-famous TCL Chinese Theatre IMAX and TCL Chinese 6 Theatres in Hollywood spoke about their 40+ annual movie premieres, current films, and their iconic forecourt of the hand and footprints, where celebrities have been imprinting their hands and feet in cement since 1927.

Actor, comedian, director, producer, philanthropist, Eugenio Derbez was on hand to discuss his lengthy film and television career. Derbez is unquestionably one of Mexico’s best-known stars; the most recognized figure among the Spanish-speaking population in the United States, and most importantly, one of the most influential creative forces in Latin America. Derbez, is the star of the Sony Pictures film “Miracles from Heaven” opposite Jennifer Garner and Queen Latifah which will be released on March 16th.

The TCL Chinese Theatre IMAX is the largest IMAX movie theatre in the world and home to the industry’s biggest red carpet premieres and the legendary hand and footprint ceremonies. This grand movie palace is a historic landmark that receives more than 5-million visitors each year.

The Hollywood Museum in the Historic Max Factor Building houses the most extensive collection of Hollywood memorabilia. Media Welcome Center display will include Marilyn Monroe memorabilia as well as costumes and props from past and current Oscar® nominated movies.

Bliss Spa, located at the beautiful W Hollywood Hotel provided neck and shoulder massages to weary camera operators throughout the event while showcasing their unique product line which is a favorite among Hollywood’s elite due to its indulgent ingredients and clever marketing taglines.

The historic Hollywood Roosevelt Hotel, home of the first Academy Awards in 1927, showcased photos from years past and showed off photos of newly-renovated rooms and suites. They offered menu samples from one of their six unique dining venues - Public Kitchen, 25 Degrees, Tropicana, Library Bar, Teddy’s Nightclub and Spare Room Gaming Parlor, which are all inside of the famed hotel.

Pink’s Hot Dogs, providing ‘Hot Dogs to the Stars’, served press their delicious dogs while talking about their “Celebrity Wall of Fame” which showcases stars who have written about their love of Pink’s.
Hard Rock Hollywood long connected to the music world enticed the press corps with their delicious Rock n’ Roll appetizers and discussed their star memorabilia collection.

Gaelyn Whitley Keith, author of “The Father of Hollywood” shared insight on the early years of Hollywood and the stories behind one of the most significant pioneers of Hollywood.