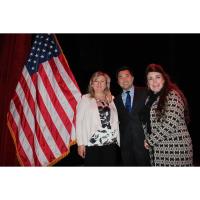 Los Angeles City Councilmember David Ryu, who represents the 4th Council District, delivered his first address to the members of the Hollywood Chamber of Commerce at Avalon Hollywood on Thursday, September 15th. In office since July 2015, he discussed some of his accomplishments and initiatives. He also answered questions related to development, neighborhood integrity initiative, land use, veterans, parks, Hollywood Sign and more.

Ryu is the first Korean-American to serve on the L.A. City Council and only the second Asian-American to do so. He studied economics at UCLA, Public Policy and Administration at Rutgers, won a prestigious United Nations graduate internship, and was a NetKal Fellow at USC’s School of Social Work. As Senior Deputy to L.A. County Supervisor Yvonne Burke, he worked for years on such issues as public health, housing, children and family services, transportation and senior services.

Since taking office, Ryu has been working on initiatives related to Land Use and Infrastructure, primarily because the scale and impact of development has been one of the top issues within his district.  His Clean Streets initiative coordinates various street maintenance efforts and services throughout his district with youth from the area. He also established a Discretionary Funds Task Force to review and provide input on the use of his discretionary funds.

He has also proposed stronger campaign finance regulations and has advocated for reform and transparent planning processes.  His effort to preserve residential neighborhoods helped set new rules to limit mansionization.  He also called for regulations of loudspeakers on tour buses, and secured neighborhood traffic improvements in the areas below the Hollywood Sign, and has enhanced Runyon Canyon Park’s aging infrastructure.