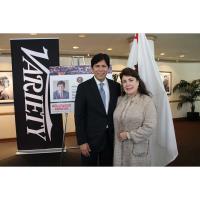 The Hollywood Chamber hosted the second State of the State Luncheon featuring California State Senate President Pro Tempore Kevin De León, at Paramount Pictures on Friday, August 12th, before a packed house. De León touched on some of the major initiatives before the State Senate, including homelessness, transportation and housing, as well as on local issues of importance such as CEQA reform and the adverse impacts of the Neighborhood Integrity Initiative. He also discussed the beginning efforts to extend the TV/Film tax credits, the State budget, and gun control. Due to the popularity of the speaker and the topics, the event has sold out in record time.

He was the lead negotiator for the expansion of California’s Film and Television Tax Credit to keep Hollywood production jobs at home in the Golden State. In addition, he has focused his efforts on issues impacting the environment, the working poor, immigration, and public safety.

For more than 95 years, the Hollywood Chamber of Commerce has provided leadership, business development resources, networking, and government affairs programs and services to keep the Hollywood business and residential communities safe, relevant and economically vital. Kaylee Kiecker is Executive Vice President and Leron Gubler is President and CEO. Dr. Fariba Kalantari of Famous Hollywood Dental Care serves as the 2016-17 Chair of Board of Directors.
Contact:
Hollywood Chamber
info@hollywoodchamber.net, (323) 469-8311