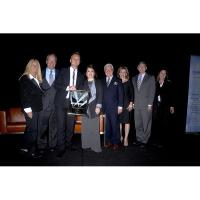 More than 300 business and community leaders attended the Hollywood Chamber of Commerce’s fourth annual State of the Entertainment Industry Conference at Loews Hollywood Hotel on November 13th. Presented by Variety, the conference continues to be the pre-eminent local forum that focuses on the importance of the Entertainment Industry to California and steps that need to be taken to keep it healthy. Returning as co-chairs were Paul Audley, President of FilmL.A., Inc. and Sharon Keyser, Senior VP, Real Estate, Government & Community Relations for Paramount Pictures.

The conference opened with a greeting from Kevin James, Director and Chief Liaison of the Mayor’s Office of Film and Television Production. The Commitment to California Award was presented to Roy Price, the head of Amazon Studios, who was interviewed by Debra Birnbaum of Variety. Producer Vin Di Bona once again emceed the conference.

A special one-on-one interview on “The State of Music in the Digital Age” was conducted with Steve Barnett, Chairman/CEO of Capitol Music Group by Steve Gaydos of Variety.