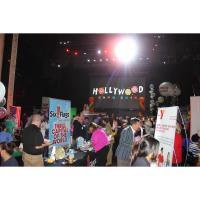 The Hollywood Chamber of Commerce proudly presented the 28th Annual Hollywood Expo at the world-famous Avalon Hollywood on Thursday, May 5, 2016. The annual Chamber function proved to be it is a premier networking event and provides exhibitors an ideal opportunity to showcase their business and make new introductions. “This year’s Expo was held during National Travel & Tourism Week, as Hollywood is an ideal destination for both corporate and leisure groups. We also featured a Health & Wellness section to highlight the importance of how ‘business and wellness’ go together!” said Kaylee Kiecker, Executive Vice President of the Hollywood Chamber.

For information about the event, please contact Kaylee Kiecker, Executive Vice President of the Hollywood Chamber at kaylee@hollywoodchamber.net.

For more than 95 years, the Hollywood Chamber of Commerce has provided leadership, business development resources, networking, and government affairs programs and services to keep the Hollywood business and residential communities safe, relevant and economically vital. Kaylee Kiecker is Executive Vice President and Leron Gubler is President and CEO. Dr. Fariba Kalantari of Famous Hollywood Dental Care serves as the 2016-17 Chair of Board of Directors.

According to new state mandates we are able to stay open. We are limiting access to ONE shopper at a time. To avoid the lines come in the MORNING, mornings are much slower
If our gate is closed please be patient & wait until someone exits before entering.  Please practice 6′ spacing between each other for healthy social distancing while shopping or waiting in line.

We are not accepting cash, card payment only.

We are so grateful for all of you Stay safe #mickeysplants

If you are open, in full or part, and require TEMPORARY SIGNAGE
(altered hours, altered services, takeout vs.sit-down seating, etc.)
or need EMBROIDERED UNIFORMS, LAB COATS or SCRUBS for temporary, relief or new staff, we are here for you.

We will offer both our temporary sign and embroidery services

for companies serving our community during this crisis.Hollywood Signs & Branding

Crateful started delivering your ready-to-eat meals,
vacuum-sealed to keep for the whole week!

Every meal is made with immune-boosting ingredients, full of nutrients, healthy for the whole family.

Our team is happy to provide you delicious food while you stay home safe!

Reminder you must have Valid ID with you when you pick up your order.