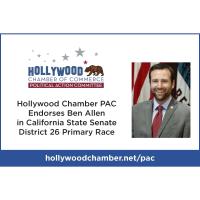 "The Hollywood Chamber PAC is proud to endorse Ben Allen in his race for reelection to represent Senate District 26. He has consistently demonstrated a special ability to identify and address problems through policy,” stated PAC Chair Mark R. Edwards. “The Chamber is especially appreciative of his efforts in developing legislation that will assist Hollywood in adopting an update to its Community Plan.”

The Chamber PAC supports many of Allen’s legislative priorities, in particular his advocacy of keeping film and television in California through the landmark Film and Television Tax Credit program. He recognizes the importance of keeping these industries in the state and the countless jobs they have created, which continue to stimulate the economy. “We are excited to continue working with the Senator in his second term and are confident that he will continue excellently representing Hollywood and the rest of his district,” Edwards commented

"I’m honored to have earned the endorsement of the Hollywood Chamber of Commerce PAC,” said Senator Ben Allen. “While in the Senate, I have worked on a number of issues facing the Hollywood community. I look forward to continue my working relationship with the Hollywood Chamber in my second term as we seek solution to address many of the pressing issues affecting Hollywood and the 26th District.”