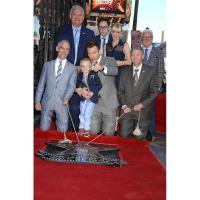 Watch as the Hollywood Chamber honors Chris Pratt on www.walkoffame.com

The Hollywood Chamber of Commerce proudly honored actor Chris Pratt   with the 2,607th star on the Hollywood Walk of Fame on Friday, April 21st, at 11:30 a.m. PDT. The star in the category of Motion Pictures was dedicated at 6834 Hollywood Boulevard in front of the El Capitan Theatre.
Helping Emcee and Hollywood Chamber President/CEO Leron Gubler to unveil the star were actress Anna Faris and director James Gunn. “Fans of Chris Pratt have been waiting for months to see their favorite actor receive his star, We are pleased to add the ‘Guardian’ to our Walk of Fame family,” stated Walk of Fame Producer Ana Martinez.

Chris Pratt was raised in Lake Stevens, Washington. After high school, Pratt studied acting at a local community college for half a semester and then relocated to Hawaii and lived in a van. He got a job at Bubba Gump Shrimp Co. restaurant where he was discovered by actress/director Rae Dawn Chong. She gave Pratt a shot in her movie “Cursed Part III,” which was never released. However, history was made and Pratt found his calling.

He began his career in television on the show “Everwood” and “The O.C.” and later became one of the stars of the Emmy®- nominated series Parks & Recreation, for which Pratt is perhaps best known for portraying the character, ‘Andy Dwyer’ opposite Amy Poehler, Nick Offerman, Aziz Ansari, and Adam Scott. After the final season of the show, his career skyrocketed.

Pratt has firmly secured himself as one of Hollywood’s most sought-after leading men. He top-lined Marvel Studios’ “Guardians of the Galaxy,” which was one of the top three grossing films of 2014 with over $770-million at the global box office. Pratt also lent his vocal talents to the lead character, Emmett, in the Warner Bros. animated feature “The Lego Movie,” which made over $400-million worldwide.

Pratt will next be seen reprising his role of Peter Quill aka Star-Lord in Marvel Studios’ “Guardians of the Galaxy Vol. 2,” which is set to release in U.S. theaters on May 5th.

Pratt recently appeared in “The Magnificent Seven,” opposite Denzel Washington and Ethan Hawke, for director Antoine Fuqua, and the Sony sci-fi drama, “Passengers,” opposite Jennifer Lawrence for Oscar®-nominated director of “The Imitation Game,” Morten Tyldum.

Other filmcredits include the DreamWorks comedy “Delivery Man”; Spike Jonze’s critically acclaimed “Her”; the Universal comedy feature, “The Five-Year Engagement”; “Moneyball”; and “Zero Dark Thirty,” which was nominated for Best Picture for both the Golden Globe® and Academy Awards®.

Pratt has dedicated his time to work with the March of Dimes, Global Alliance to Prevent Prematurity and Stillbirth, and the Boys & Girls Club in Lake Stevens, Washington.

The Hollywood Chamber of Commerce is proud to announce that actor Chris Pratt will be honored with the 2,607th star on the Hollywood Walk of Fame on Friday, April 21st, at 11:30 a.m. PDT. The star in the category of Motion Pictures will be dedicated at 6834 Hollywood Boulevard in front of the El Capitan Theatre.