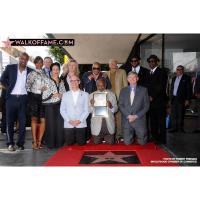 Watch the complete ceremony as Clarence Avant unveils the star on www.walkoffame.com.

The Hollywood Chamber of Commerce proudly honored music executive Clarence Avant with the 2,590th star on the Hollywood Walk of Fame on Friday, October 7, 2016 at 11:30 a.m. PDT.

The star in the category of Recording is located at 6363 Hollywood Boulevard next to the star of music producers Jimmy Jam & Terry Lewis who he worked with for many years.

“We are thrilled to add Clarence Avant to the Hollywood Walk of Fame. He has been an inspiration to many musical performers and has added so much to the history of American music,” stated Leron Gubler, President/CEO of the Hollywood Chamber of Commerce.

Clarence Avant is known to many as the “Godfather of Black Music.” Born Clarence Alexander Avant in 1931 in Greensboro, North Carolina, Clarence was one of eight children. He attended a segregated two-room school in Climax, North Carolina until the third grade and then attended school in Goshen, NC (now part of present-day Greensboro, NC) through the eighth grade. He spent his Freshman and Sophomore years at Dudley High School in Greensboro, NC before dropping out at the age of 16. With his drive, determination, street smarts, and an unwavering commitment to success, Avant became one of the entertainment industry’s must successful executives as well as a respected entrepreneur, business advisor, mentor, and civic leader. Avant’s influence spans across the recording and entertainment industry, politics, and both civil rights and charitable endeavors around the world.

Avant’s career in the music industry began in the late 1950s as the manager of Teddy P’s Lounge in Newark, New Jersey, representing blues artist Little Willie John, a frequent act at the lounge. He went on to manage jazz organist Jimmy Smith, jazz producer Creed Taylor, and became familiar with those in the jazz community, including Joseph Glaser, music manager of Louis Armstrong, who served as a strong influence and mentor to Clarence. Avant also represented rock & roll record pioneer Tom Wilson, with whom he partnered in the Wilson Organization. After meeting the then-pianist for Dizzy Gillespie’s band, Argentine composer Lalo Schifrin (best known for film and TV score, such as the theme for Mission Impossible), Joe Glaser encouraged them to work together. As a result, Clarence Avant moved to Los Angeles. As a consultant for MGM Studios, former Motown A & R, William Mickey Stevenson, asked Avant to represent him in a new joint music label with MGM Records’ financial backing, Venture Records. This would become the first joint venture between an African American-owned music company and a major record label. Shortly thereafter, record producer, songwriter, and executive Al Bell enlisted the aid of Avant to sell Stax Records to Gulf & Western in 1968.

Avant formed Sussex Records in Hollywood in 1969. He assembled a slate of artists, including “Sixto” Rodriguez, The Presidents, Bill Withers, Dennis Coffey, The Gallery, Amish, Creative Source, Bill Cosby presents Bad Brown & The Bunions Bradford Funeral Marching Band, Faith, Hope, & Charity, Lonette McKee, The Soul Searchers, and Phonetic Rock along with other artists in an expansive catalogue. One of Sussex Records’ most successful artists was Bill Withers, whose 1971 LP “Just As I Am” scored a Grammy for the hit single “Ain’t No Sunshine.” Withers’s Withers’ songs, like “Lean on Me” and “Grandma’s Hands,” have been sampled by hip-hop and R&B acts from Big Daddy Kane to Blackstreet.  Later in the 1970s, Avant founded KAGB (Avant Garde Broadcasting), which was one of the first African American owned radio stations in the Los Angeles market. It became a beacon for Black music.

Throughout his career, Avant has advised a broad range of artist and business executives, standing out as a pioneer and mentor for a generation in the music industry. He was the force behind deals with the successful rise of Grammy Award-winning R&B and pop music songwriters and producers Jimmy Jam and Terry Lewis, who worked with several Tabu Records artist and later, Janet Jackson.

Avant went on to represent Kenny “Babyface” Edmonds and Antonio “LA” Reid in connection with the launch of the joint venture between their labels, LaFace Records and Arista Records, spawning mega artists such as Toni Braxton. In 1988, with the help of former music promoter Al Haymon, Avant promoted “Bad,” Michael Jackson’s first and only solo world tour.

During the 1990s, Avant served as the Chairman of the Board of Motown Records and was a member of the Board of Directors of PolyGram International. In addition to his music ventures, Avant served as Executive Producer on the film “Save the Children” for the PUSH Foundation; as Executive Producer for the only television show hosted by Muhammad Ali, ABC’s“Wide World of Sports,” and on the PepsiCo African American Advisory Board from 1998-2007.