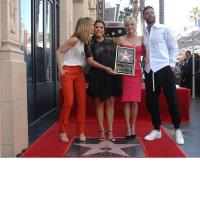 Watch us as the Hollywood Chamber honors Eva Longoria on www.walkoffame.com

The Hollywood Chamber of Commerce proudly honored actress and activist Eva Longoria with the 2,634th star on the Hollywood Walk of Fame today, Monday, April 16, 2018 at 11:30 a.m. PDT.  The star was dedicated in the category of Television at 6906 Hollywood Boulevard.

“We are not going Overboard when we say that Eva Longoria is one of Hollywood’s most popular television stars and directors. She embodies the woman who is working hard on her craft and at the same time gets involved in world matters. We are proud to add this popular actress on our historic Walk of Fame,” stated Ana Martinez, Producer of the Walk of Fame ceremonies.

Eva Longoria is a Golden Globe-nominated, Screen Actors Guild and ALMA Award-winning actress, producer, director, entrepreneur, philanthropist and “Desperate Housewives” alum. Longoria is set to co-star opposite Anna Faris (“Mom”) and Eugenio Derbez (How To Be A Latin Lover) in the MGM/Pantelion re-imagined adaptation of the comedic cult-classic film Overboard set for a May 4th, 2018 wide-theatrical release. Additionally, Longoria has two other feature films, Dog Days and All-Star Weekend that are set for a theatrical release later this year. Last year, she starred opposite Academy Award-nominated Demián Bichir in the Universal feature film Lowriders, which looks at the lives of low-riding culture enthusiasts in Los Angeles’ Latino communities.

Longoria starred as ‘Gabrielle Solis’ in ABC’s mega-hit and three time Golden Globe Award-winning series “Desperate Housewives,” which ran for 8 seasons and was the most popular show in its demographic worldwide airing in 208 countries with an audience of 120 million viewers. Behind the camera, Longoria is actively directing and producing – most recently directing the Emmy Award-nominated comedy series “Black-ish” starring Tracee Ellis Ross, FOX’s “The Mick” starring Kaitlin Olson, the Golden Globe-nominated “Jane the Virgin” starring Gina Rodriguez, and the new FOX series “LA to Vegas” starring Dylan McDermott. She is additionally in development as an executive producer for several other projects through her production company, UnbeliEVAble Entertainment including the drama series “Grand Hotel” which has been picked up to pilot by ABC. The show, which has cast Academy Award-nominee Demián Bichir (The Hateful Eight) for the lead, is written by Brian Tanen (“Desperate Housewives,” “Atypical,” “Devious Maids”) with director Ken Olin (“This is Us”).

This year marks Longoria’s 13th year as a Global Brand Ambassador for L’Oréal Paris; she owns the production company UnbeliEVAble Entertainment; recently launched her first fashion line The Eva Longoria Collection which showed at NYFW; has a home collection line with JCPenney; a New York Times bestselling cookbook EVA’S KITCHEN; and created the fragrances “EVA” and “EVAmour”. Her greatest work however is as a champion of women, the Latino community, and youth with special needs. In the wake of the #MeToo Movement, Longoria joined forces with Hollywood women to say that time was up, co-founding the #TimesUp campaign which has since swept the entertainment, film, television, music, business, tech, farm, and political industries across the world. Powered by women, #TimesUp addresses the systemic inequality and injustice in the workplace by partnering up with leading advocates for equality and safety to improve laws, employment agreements, and corporate policies, and enable more women and men to access our legal system to hold wrongdoers accountable. Longoria is also the founder ofThe Eva Longoria Foundation, dedicated to helping Latinas build better futures for themselves through education and entrepreneurship, co-founder ofEva's Heroes which enriches the lives of adolescents with developmental disabilities and is national spokesperson for Padres Contra el Cancer a nonprofit that is committed to improving the quality of life for children with cancer.

Longoria was honored by Variety with a Lifetime Achievement Award for their “Power of Women” issue and named “Philanthropist of the Year” by The Hollywood Reporter. Longoria has received countless other awards for her philanthropy and activism including: the prestigious “Dorothy I. Height Racial Justice Award” by the YWCA USA; the “Norma Zarky Humanitarian Award” from Women in Film; and the National Hispanic Foundation for the Art’s “Horizon Award.”  Additionally, Longoria received her Master’s degree in Chicano Studies from California State University, Northridge, writing her thesis on “Success STEMS from Diversity: The Value of Latinas in STEM Careers.”