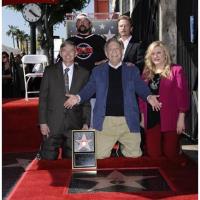 The Hollywood Chamber of Commerce honored actor George Segal with the 2,602nd star on the Hollywood Walk of Fame on Tuesday, February 14th, 2017. The star in the category of Television was dedicated at 6433 Hollywood Boulevard in front of the historic Pacific Theatre.

Helping Emcee and Hollywood Chamber President/CEO Leron Gubler to unveil the star were David Spade and Kevin Smith. “George Segal is a triple threat! In his more than 50-year career, he has entertained fans of all ages!” stated, Ana Martinez, Producer of the Walk of Fame ceremonies. “We welcome this Hollywood icon to the Hollywood Walk of Fame!”

George Segal was born in Great Neck, New York, in 1934 where he had a magic act at the age of ten. He has been performing ever since.

Many fans will recognize him from his successful seven-year run in Just Shoot Me!, and more recently from his confident, jaunty turn as Hollywood manager Murray Berenson in the hit series Entourage, or as a father whose son moves back home in the sitcom Retired at 35. Segal can currently be seen as the loving grandfather with Casanova-esque qualities, Pops on ABC’s highly successful 1980s-set sitcom The Goldbergs, which is currently in its fourth season. Segal starred as Biff Loman in the television movie, Death of a Salesman, which won the Primetime Emmy for Outstanding Dramatic Program in 1967. Other TV appearances include Private Practice, Pushing Daisies, Boston Legal, Law & Order: SVU, Tracy Takes On…, The Real Adventures of Johnny Quest, The Larry Sanders Show, High Tide, and Murphy’s Law.

Segal’s other television credits include twelve appearances on the couch as a guest on The Tonight Show with Johnny Carson, and Smothers Brothers, where he showcased his talent on the banjo. He also made multiple appearances on The Match Game, What’s My Line?, I’ve Got A Secret, Circus of the Stars, and numerous appearances on award shows including co-hosting the 48th Annual Academy Awards in 1976.

On the big screen, with credits spanning back to the early 1960s, he first gained critical attention as a distraught newlywed in Ship of Fools, and as a P.O.W. in King Rat. He recently appeared as Jake Gyllenhaal’s father in Love & Other Drugs, as well as in Roland Emmerich’s epic adventure, 2012. His early work included Who’s Afraid of Virginia Woolf? for which he received an Oscar nomination, alongside Elizabeth Taylor and Richard Burton, The Owl and the Pussycat opposite Barbara Streisand, and A Touch of Class, for which he won a Golden Globe for Best Actor in a Motion Picture Comedy or Musical. Among his many feature comedies are Where’s Poppa?, Fun With Dick and Jane, Flirting With Disaster and Blume in Love.

For over twenty years, Segal has been an advocate, donor, and emcee for galas benefiting the charity “Erasing the Stigma” which aims to eradicate the stigma associated with mental illness.