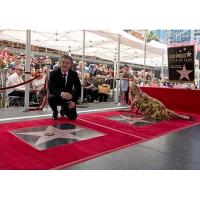 Watch us as the Hollywood Chamber honors Goldie Hawn and Kurt Russell exclusively on www.walkoffame.com

The Hollywood Chamber of Commerce honored Goldie Hawn and Kurt Russell with the 2,609th and 2,610th stars respectively on the Hollywood Walk of Fame on May 4, 2017 at 11:30 a.m. PDT. Both honorees’ stars were dedicated in the category of Motion Pictures at 6201 Hollywood Boulevard in front of Eastown.

“The Hollywood Walk of Fame makes an effort to place celebrities who work together or are a couple next to each other on our famed sidewalk,” stated Walk of Fame Producer Ana Martinez.  “We’ve placed notable partners such as film producers Richard Donner and Lauren Shuler Donner next to each other’s star on the Walk of Fame. They were the first married couple to be honored on the same day with double stars on October 16, 2008. We honored married actors Felicity Huffman and William H. Macy with double stars on March 7, 2012. Cyndi Lauper and Harvey Fierstein who worked together on the Broadway hit “Kinky Boots” were recently honored with double stars as well. There are other related celebrities who have side by side double stars, but had separate ceremonies. They include: Bob and Dolores Hope, Kevin Bacon and Kyra Sedgwick, Sherry Lansing and William Friedkin, Ozzie and Harriet Nelson, Betty White and Allen Ludden, to name a few.

As an actress, best-selling author, producer and director, Hawn is one of the most recognizable and beloved actresses in Hollywood. Her gift for performing began at age 3, which is when she started dancing. At 17, she took her talents to Williamsburg, Virginia where she landed her first professional dancing and acting role in “Romeo and Juliet.” While attending American University, she won a “Best Acting Performance” award for her role in “The Trial” by Franz Kafka.

Hawn made her acting debut in the situation comedy Good Morning, World. She rose to prominence as part of the cast of the iconic comedy show Laugh-In. In 1969, Hawn won an Academy Award© for Best Supporting Actress for her work in Cactus Flower alongside Walter Matthau and Ingrid Bergman.

She has starred in more than thirty films, among them, “Sugarland Express,” “Death Becomes Her,” “Everyone Says I Love You” and “The First Wives Club.” Hawn earned a second Academy Award© nomination for her starring role in “Private Benjamin,” which she executive produced. She has received nine Golden Globe nominations to date, including one for her role in “Banger Sisters,” alongside Susan Sarandon in 2003. She can next be seen starring alongside comedian Amy Schumer in Fox’s film “Snatched” opening nationwide on May 12.

Hawn has produced many other films for movies and television such as “Protocol,” Wildcats,” “Overboard,” “My Blue Heaven,” “Something To Talk About,” “When Billie Beat Bobby,” “The Matthew Shepard Story” and“Mad Money”.

Hawn made her directorial debut in 1997 with the film Hope starring J.T. Walsh, Christine Lahti and Jena Malone. She published her best-selling memoir, A Lotus Grows in the Mud, in 2005. Her book, 10 Mindful Minutes, was released in September 2011, offering guidance on raising healthy, joyful, and resilient children. She is the founder of The Hawn Foundation, an international charitable organization with a mission to equip children with the social and emotional skills they need to lead smarter, healthier, and happier lives. Working with leading neuroscientists, educators, psychologists and researchers, the Foundation developed MindUP™, an evidence-based curriculum and teaching model for grades K-8 that provides tools to help children self-regulate and understand their own emotions, moods and behaviors; reduce stress and anxiety; sharpen concentration; increase empathy and improve academic performance.

Kurt Russell is now in the middle of six decades of delivering memorable comedic and dramatic film performances as well as creating iconic film characters. He was born in Springfield, Massachusetts and started his acting career in 1961 at the age of 10.  In 1963 he starred in the title role of ABC’s Western “The Travels of Jaimie McPheeters,” Throughout his early years, he appeared in television’s most storied shows: Gilligan’s Island, The Man From U.N.C.L.E., “Lost In Space,” “The Virginian,” “Laredo”, “The High Chaparral,” “Daniel Boone,” “Gunsmoke,” “Love American Style,” “Harry O,” “Hawaii Five-0,” and “Police Story,” to name but a few.  He starred in two other network series along the way: NBC’s “The New Land” and ABC’s western, “The Quest”.  During this early period, he also began one of the longest lasting relationships in movie history between an actor and a studio . . . The Walt Disney Studio.  Signed by Walt Disney himself to a seven year exclusive contract, Russell first co-starred opposite Fred MacMurray and Vera Miles in 1966’s “Follow Me, Boys!” for which he was singled out as film’s Newcomer of the year.  Over the next forty plus years, Russell would star or co-star in Disney films sixteen times while also starring in many Wonderful World of Color television series and specials.  Some of those fan favorites from the 60s and 70s are; “The Computer Wore Tennis Shoes,” “The Barefoot Executive,” “The Strongest Man In The World,” “Now You See Him,” “Now You Don’t,” “Superdad,” “The Fox And The Hound” and later in “Captain Ron,” “Miracle” and what is now considered by many one of the greatest and easily most quoted westerns made, “Tombstone”.  The Disney/Russell relationship continues with “Guardians Of The Galaxy Vol. 2. which will be released on May 5.

It was perhaps his performance as Elvis Presley in ABC’s highly acclaimed “Elvis,” his first of many collaborations with director John Carpenter, that alerted the film world to the wide range of roles this actor had in store.  Russell received a Primetime Emmy nomination for “Elvis.”   He refused to be typecast within one perception, and so began a vast array of unique characters in an equally wide range of genres throughout his career.

Some of his past starring roles include a slick, totally unscrupulous cars salesman “Rudy Russo” in Robert Zemeckis’ outrageous cult comedy “Used Cars.”  He followed that with another John Carpenter film, the dystopian futuristic suspense filled “Escape From New York,” where an iconic cult character was born, “Snake Plissken.”  Carpenter and Russell teamed again to create another cult classic in the horror/sci-fi thriller “The Thing.”   Next was a straight dramatic turn as Meryl Streep’s wistful lover in Mike Nichols Academy Award nominated “Silkwood,” which garnered Russell a Golden Globe nomination. That led to starring opposite Goldie Hawn in Jonathan Demme’s World War Two dramedy “Swing Shift.”  It was during this movie where Hawn and Russell fell in love and started what would become one of filmdom’s most heralded and long lasting love affairs.  Hawn and Russell would star together one last time (so far) in one of the most beloved romantic comedies of our generation, “Overboard.”  The comedy “The Best Of Times” with Robin Williams was followed by the suspense terror filled “The Mean Season,” and again with John Carpenter as the adventurous lovable blowhard “Jack Burton” in yet another film destined to become a true cult classic, “Big Trouble In Little China”.   Among the many movies Russell starred in during the 80s and 90s were standouts like Robert Towne’s Noir drama “Tequila Sunrise” opposite Mel Gibson, the action packed laugher “Tango and Cash” with Sylvester Stallone, and Ron Howard’s epic film honoring the heroism of dedicated firemen in “Back Draft.”   Those movies along with “Captain Ron,” “Tombstone,” “Executive Decision,” the taut thriller “Breakdown” and the sci-fi surprise of the decade “Stargate,” all opened as number one movies.

The actor who refused to be defined by one type of role or genre had become an international movie star.  But yet to come was the insane, broken down, car crashing killer “Stuntman Mike” in Quentin Tarantino’s retro 70’s “Death Proof,” followed by another Tarantino partnership as the bombastic paranoid bounty hunter “John the Hangman Ruth” in “The Hateful Eight”.

Most recently he starred as “Mr. Jimmy,” the manager of the fated drilling rig in Pete Berg’s dramatization of the real life tragedy “Deepwater Horizon” and “Sheriff Hunt” in “Bone Tomahawk,” a movie so cultish that many have claimed has no genre. Most recently, Russell reprised his role as “Mr. Nobody” in the 7th installment of “The Fast And Furious” saga, the mysterious man with no name who continues to confound in “The Fate Of The Furious,” which is in theatres now and is the biggest opening movie of all time. Russell can next be seen in a small but sweet little movie called “Guardians of the Galaxy Vol. 2” which will be released May 5.

Russell is also involved with the Hawn Foundation.