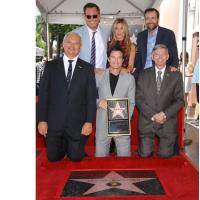 Watch as the Hollywood Chamber honors Jason Bateman on www.walkoffame.com

The Hollywood Chamber of Commerce honored Jason Bateman with the 2,616th star on the Hollywood Walk of Fame today, on Wednesday, July 26, 2017 at 11:30 a.m. PDT. Bateman’s star was dedicated in the category of Motion Pictures at 6533 Hollywood Boulevard in front of The Hudson Apartments.

“Bateman has been a constant on television and the big screen and has amassed a large body of work that captured generations of fans,” said Ana Martinez, Producer of the Hollywood Walk of Fame. “We are pleased to add his star to our   Walk of Fame family.”

Helping Emcee and Hollywood Chamber President/CEO Leron Gubler to unveil the star were guest speakers Jennifer Aniston and Will Arnett.

Jason Bateman has attained leading-man status in Hollywood in front of and behind the camera. The actor, producer and director has since evolved from the small screen to securing one major film role after another. Bateman gained critical acclaim for his irreverent portrayal of Michael Bluth in the award-winning comedy series “Arrested Development,” created by Mitch Hurwitz. Bateman’s lead role earned him a Golden Globe® for best actor in a comedy series. In 2013, Netflix premiered a 14-episode return of the cult favorite, for which Bateman reprised his role, earning him best actor nominations for the Emmy®, SAG, and Golden Globe® awards.

Bateman can be seen next starring in “Ozark,” a Netflix drama series produced by MRC and Bateman’s own production banner Aggregate Films. Bateman also serves as executive producer and director on the series which will be released on Netflix on July 21, 2017. The first season will comprise of ten, one-hour episodes that follow play financial planner Marty Bird, who suddenly relocates from a Chicago suburb to a summer resort community in the Missouri Ozarks, and who must pay off a debt to a Mexican drug lord. Laura Linney, Julia Garner, and Michael Mosley co-star.

Bateman recently completed production on “Game Night” opposite Rachel McAdams, Jesse Plemons, and Kyle Chandler. Directed by John Francis Daley and Jonathan Goldstein, the film is slated for release by Warner Bros. on February 14, 2018. The film is being executive produced by Aggregate Films.

In December 2016, Bateman starred in “Office Christmas Party,”a holiday comedy from DreamWorks Pictures, alongside Jennifer Aniston, TJ Miller, Olivia Munn, and Kate McKinnon. Also in 2016, Bateman lent his voice to Disney’s Oscar® and Golden Globe®-winning animated feature “Zootopia,” as Nick Wilde, a red fox con artist who forms an unlikely partnership with a rabbit police officer (voiced by Ginnifer Goodwin) to uncover a conspiracy involving the disappearance of savage predator inhabitants of a mammalian metropolis. The film opened to critical acclaim and worldwide record-breaking box office success, with the 28th highest gross box office of all time over $1-billion.

In May 2016, Bateman directed the indie drama “The Family Fang,” in which he also starred opposite Nicole Kidman. Based on the Kevin Wilson bestseller, the comedy tells the tale of two performance artists whose kids blame them for how badly their lives turned out. “The Family Fang” premiered at the 2015 Toronto International Film Festival and was released theatrically by Starz. The film was produced under Aggregate Films.

In August 2015, Bateman starred alongside Joel Edgerton and Rebecca Hall in “The Gift,” an American-Australian psychological thriller film written, produced and directed by Edgerton. The previous year, Bateman also starred in Shawn Levy’s “This Is Where I Leave You,” opposite Tina Fey, Rose Byrne, and Adam Driver.

In March 2014, Bateman made his directorial debut with the dark comedy “Bad Words,” in which he also starred. The film tells the story of a spelling bee loser who sets out to exact revenge by finding a loophole and attempting to win as an adult. “Bad Words” had its world premiere at the 2013 Toronto International Film Festival and its U.S. premiere the 2014 SXSW Film Festival, and was released by Focus Features.

In March 2011, Bateman co-starred in Greg Mottola’s comedy “Paul,” which was written by and starred by Nick Frost and Simon Pegg. He also starred in back-to-back leading roles, including opposite Ryan Reynolds in David Dobkin’s comedy “The Change-Up” and the box-office hit “Horrible Bosses,” opposite Jennifer Aniston, Jason Sudeikis, Charlie Day, and Kevin Spacey. Bateman reprised his role as Nick Hendricks in “Horrible Bosses 2” in 2014.

In 2010, Bateman starred with Jennifer Aniston in the romantic comedy “The Switch.” He shined in a supporting role opposite George Clooney in the Golden Globe® and Academy Award®-nominated film “Up in the Air,” directed by Jason Reitman; and starred alongside Vince Vaughn and Kristen Bell in Jon Favreau’s “Couples Retreat.” In 2009, Bateman headlined director Mike Judge’s “Extract,” which was produced by Bateman through his previous F+A Productions banner. He also had a memorable cameo in the Ricky Gervais comedy “The Invention of Lying,” and delivered an emotionally charged performance in Kevin Macdonald’s crime drama “State of Play.”

In 2007, Bateman had a pivotal role as a potential adoptive father in Jason Reitman’s “Juno,” one of the biggest success stories in independent filmmaking. “Juno” received best film nominations by most major film critics’ groups, as well as the Hollywood Foreign Press Association and Academy of Motion Picture Arts and Sciences. Later that year, Bateman starred in Zach Helm’s family fantasy “Mr. Magorium’s Wonder Emporium” with Dustin Hoffman and Natalie Portman, as well as Peter Berg’s action thriller “The Kingdom.”

In his adolescent and teen years, Bateman’s portrayal of charming schemer Derek Taylor in “Silver Spoons” prompted NBC to create the spin-off “It’s Your Move,” starring Bateman. He then starred with Valerie Harper in the television series “Valerie,” retitled “Valerie’s Family” and then “The Hogan Family,” from 1986 through 1991. Prior to that, he was a series regular on the iconic television series that became an American treasure, “Little House on the Prairie,” with Michael Landon.

In 2012, Bateman established the production banner Aggregate Films with a first-look, two-year partnership with Universal Pictures and Universal Television. The contract was extended in 2014.