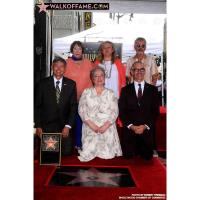 The Hollywood Chamber of Commerce proudly honored award-winning actress Kathy Bates with the 2,589th star on the Hollywood Walk of Fame on Tuesday, September 20, 2016. The star in the category of Motion Pictures was dedicated at 6927 Hollywood Boulevard in front of the TCL Chinese Theatre. “We are thrilled that Kathy Bates will be gracing our Walk of Fame! This very prominent actor is a triple threat on stage, screen and television!” stated Walk of Fame producer Ana Martinez. Helping Emcee Leron Gubler unveil the star were fellow Walk of Famers and actors Shirley MacLaine and Billy Bob Thornton. Fans can watch the star ceremony at http://www.walkoffame.com/kathy-bates

Kathy Bates was born in Memphis, Tennessee in 1948.

Bates is currently in production in the sixth installment of American Horror Story which will premiere on FX Wednesday, September 14 at 10pm. Additionally, she is in pre-production on Netflix’s new series, Disjointed, a pot-themed workplace comedy with Chuck Lorre and David Javerbaun writing and executive producing. Bates plays a lifelong advocate for legalization who is finally living her dream as the owner of an L.A.-area cannabis dispensary.

Bates was last seen in the fifth installment of Ryan Murphy’s American Horror Story: HOTEL on FX. Her most recent role in the series led to her receiving her 8th Emmy nomination. Bates won rave reviews and her second Emmy® Award as the deliciously evil ‘Madame Delphine LaLaurie’ in the third installment of the series Coven. Prior to that,  Bates starred in two seasons as “Harriet ‘Harry’ Korn,” a curmudgeonly ex-patent lawyer in David E. Kelly’s hit NBC television show  “Harry’s Law” garnering her two Emmy® nominations for Lead Actress in a drama series. Previously, Bates was nominated seven times for EmmyAwards® before winning her first Emmy® Award in 2003 playing “Ghost of Charlie Harper” in Two and a Half Men.

Upcoming in film, Bates will appear alongside Rachel Weisz, Michael Shannon and Danny Glover in the Josh Marston directed drama Complete Unknown. The film premiered at the 2016 Sundance Film Festival and will premiere nationwide on August 26th. In November, Bates will star in the anticipated comedy sequel Bad Santa 2 alongside Billy Bob Thornton which is set to release November 23, 2016. Later this year, Bates will appear alongside Jessica Chastain and Susan Sarandon in the Xavier Dolan drama The Death and Life of John F. Donovan. The film follows an American movie star who finds his correspondence with an 11-year-old actor exposed, prompting assumptions that begin to destroy his life and career.

Bates won an Academy Award® and a Golden Globe® for her portrayal of the obsessed fan “Annie Wilkes” in Rob Reiner’s 1990 hit Misery, based on Stephen King’s novel. In 1999, she received Oscar®, Golden Globe and BAFTA nominations and won a Screen Actors Guild (SAG) Award® and a Critics Choice Award for her performance in Mike Nichols’ Primary Colors. Bates more recently earned her third Oscar® nomination for her role in Alexander Payne’s About Schmidt, for which she also garnered Golden Globe and SAG Award nominations and won a National Board of Review Award for Best Supporting Actress. Her film work has also been recognized with Golden Globe® and BAFTA Award nominations for Jon Avnet’s Fried Green Tomatoes. Bates also shared in a SAG Award® nomination with the ensemble cast of James Cameron’s all-time, top-grossing blockbuster Titanic as well as a nomination for the ensemble of Woody Allen’s biggest success, Midnight in Paris.

Recently, Bates was seen in The Boss and Tammy with Melissa McCarthy; Boychoir with Dustin Hoffman; The Blind Side with Sandra Bullock; Stephen Frears’ period drama Cheri, in which she starred with Michelle Pfeiffer; Sam Mendes’ acclaimed drama Revolutionary Road, which reunited her with Leonardo DiCaprio and Kate Winslet. Additional film credits include Dolores Claiborne, P.S. I Love You, Failure to Launch, Little Black Book, Dragonfly, The Waterboy, The War at Home, A Home of Our Own, Dick Tracy, Men Don’t Leave, Robert Altman’s Come Back to the Five and Dime, Jimmy Dean, Jimmy Dean, Straight Time and Milos Forman’s Taking Off. Bates lent her voice to Jerry Seinfeld’s animated comedy Bee Movie, as well as Charlotte’s Web, The Golden Compass and the animated short Cadaver.

Bates has also been honored for her work behind the camera as a director. She helmed the A&E telefilm Dash and Lilly, starring Sam Shepard and Judy Davis, which earned nine Emmy® nominations, including one for Bates as Best Director. She also directed five episodes of the acclaimed HBO series Six Feet Under, earning a Directors Guild of America Award for the episode entitled “Twilight.” Her directing credits also include episodes of such series as Oz, NYPD Blue and Homicide: Life on the Street.

Bates first gained the attention of critics and audiences on the New York stage. She was nominated for a Tony®Award for her portrayal of the suicidal daughter in the original Broadway production of Marsha Norman’s Pulitzer Prize-winning play `night, Mother. She has been honored with an Obie®Award for her performance as “Frankie” in the original Off-Broadway production of Frankie and Johnny in the Clair de Lune. She portrayed “Elsa Barlow” in Athol Fugard’s The Road to Mecca, which Bates also starred in when filmed. She began her stage career starring as “Joanne” in Jack Heifner’s Vanities one of the longest running plays in Off-Broadway history.

ABOUT THE HOLLYWOOD WALK OF FAME www.WalkOfFame.com
The Hollywood Walk of Fame is an internationally-recognized Hollywood icon. With approximately 24 star ceremonies annually broadcast around the world, the constant reinforcement provided to the public has made the Walk of Fame a top visitor attraction. The Hollywood Chamber of Commerce continues to add stars on the Walk of Fame as the representative of the City of Los Angeles. The Walk of Fame is a tribute to all of those who worked diligently to develop the concept and to maintain this world-class tourist attraction. The Walk of Fame is open to the public. No paid admission or assigned seating at star ceremonies. It is understood that the cost of installing a star on the Walk of Fame upon approval is $30,000 and the sponsor of the nominee accepts the responsibility for arranging for payment to the Hollywood Historic Trust, a 501(c)3 charitable foundation. The funds are used to pay for the creation/installation of the star and ceremony, as well as maintenance of the Walk of Fame. Download the official app for iPhones and Android devices at http://officialhollywoodwalkoffameapp.com