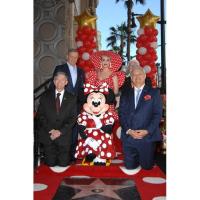 Watch as the Hollywood Chamber honors Minnie Mouse with star on www.walkoffame.com

The Hollywood Chamber of Commerce proudly honored Minnie Mouse   with the 2,627th star on the Hollywood Walk of Fame on Monday, January 22, 2018. The star was dedicated in the category of Motion Pictures at 6834 Hollywood Boulevard in front of El Capitan Theatre.

“Minnie Mouse is a woman of the ages and her iconic status makes her a great addition to our Walk of Fame!” stated Ana Martinez, Producer of the Walk of Fame ceremonies. “Generations of fans of all ages have been looking forward to her seeing her bright new star. It was great seeing all her fans decked out in polka dots and mouse ears today in celebration of Disney’s Annual Rock the Dots Day which is a tribute to Minnie,” added Martinez.

Helping Emcee Leron Gubler, President & CEO of the Hollywood Chamber of Commerce to unveil the star were Robert A. Iger, Chairman and Chief Executive Officer of The Walt Disney Company, and global pop icon and judge of ABC’s “American Idol,” Katy Perry.

This year, Minnie Mouse marks her incredible 90th Anniversary in entertainment, a rare accomplishment in the industry. It is the perfect time for Minnie to be recognized on the Hollywood Walk of Fame and join other Disney characters: Donald Duck, Tinker Bell, Winnie the Pooh, Snow White, Kermit the Frog, and, of course, Mickey Mouse.

Minnie made her debut in the Disney classic, Steamboat Willie, and she instantly became America’s sweetheart. For decades, Minnie has delighted generations of fans with her fun-loving, independent personality and timeless style. Her ability to embody a sense of both old Hollywood elegance and grace, combined with girl-next-door charm established Minnie as one of the most beloved animated characters around the world.

A renowned veteran with more than 70 films, Minnie Mouse is one of Hollywood’s most prolific stars. Since the late 1920s, she’s had starring roles and has performed in a number of period pieces, costume dramas, and TV shows.

Minnie is also a long-standing fashion icon. She has served as a muse for designers, inspiring new fashion collections, and has appeared in magazines and runway shows in New York, Tokyo, and Paris. Her classic polka dot look has been reimagined by the fashion industry through the decades and continues to drive current trends. From her early pill-box flower hat, which has inspired ladies’ hat trends, to her famous bow and ears, Minnie has been looked to for style inspiration since her inception.

In addition to the glitz and glamour, Minnie is civic-minded and has used her talent and celebrity to support causes that affect countless communities in positive ways. In 2016 and 2017, Minnie was well represented by Disney fans and social media users who participated in #ShareYourEars campaigns that resulted in $4-million in donations benefitting Make-A-Wish.

The Hollywood Walk of Fame is an internationally-recognized Hollywood icon. With approximately 24 star ceremonies annually broadcast around the world, the constant reinforcement provided to the public has made the Walk of Fame a top visitor attraction. The Hollywood Chamber of Commerce continues to add stars on the Walk of Fame as the representative of the City of Los Angeles. The Walk of Fame is a tribute to all of those who worked diligently to develop the concept and to maintain this world-class tourist attraction. The Walk of Fame is open to the public. No paid admission or assigned seating at star ceremonies. It is understood that the cost of installing a star on the Walk of Fame upon approval is $40,000 and the sponsor of the nominee accepts the responsibility for arranging for payment to the Hollywood Historic Trust, a 501(c)3 charitable foundation. The funds are used to pay for the creation/installation of the star and ceremony, as well as maintenance of the Walk of Fame. Download the official app for iPhones and Android devices at http://officialhollywoodwalkoffameapp.com