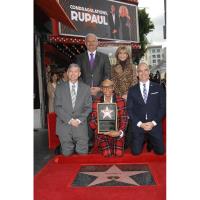 Watch LIVE as the Hollywood Chamber honors RuPaul on 3/16 exclusively on www.walkoffame.com

The Hollywood Chamber of Commerce proudly honored drag performer RuPaul with the 2,631st star on the Hollywood Walk of Fame on Friday, March 16, 2018 at 11:30 a.m. PDT.  The star was dedicated in the category of Television at 6652 Hollywood Boulevard in front of the World of Wonder production office which produces the show “RuPaul’s Drag Race.”

“RuPaul is a Ruvolutionary performer who brought the art of Drag into the American public eye and made it mainstream.  We are proud to add this groundbreaking entertainer on our historic Hollywood Walk of Fame,” stated Ana Martinez, Producer of the Walk of Fame ceremonies.

​The Hollywood Chamber of Commerce which administers the popular star ceremonies encourages people who are unable to attend and fans around the world to watch the event exclusively on www.walkoffame.com.

Named one of Time Magazine’s 100 Most Influential People of 2017, RuPaul Charles is a renaissance performer who has created an unprecedented career for over 35 years as an actor, model, singer, songwriter, television personality and author and notably the most successful drag queen of all time.

RuPaul was born and raised in San Diego and later moved to Atlanta where he Studied theatre at the North Atlanta School of Performing Arts.

In the mid-eighties, he settled in New York City where he became a popular fixture on the nightclub scene earning himself the title: Queen of Manhattan. RuPaul's first prominent national exposure came in 1989 with a featuredrole dancing in the B52’s Love Shack music video.

RuPaul achieved international fame with the release of the single, Supermodel (You Better Work), which was included on his debut album Supermodel of the World (1993).

In 1995, he became the first spokesperson for M.A.C Cosmetics, raising millions of dollars for the M.A.C AIDS Fund and becoming the first man to land a major cosmetics campaign.

In 1996, RuPaul landed a TV talk show on VH1, The RuPaul Show and taped over 100 episodes with co-host, Michelle Visage while simultaneously co-hosting a morning drive radio show on WKTU, also with Michelle Visage.