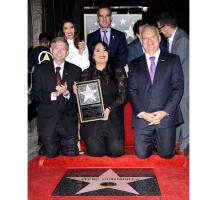 The Hollywood Chamber of Commerce proudly honored the late Selena Quintanilla with the 2,622nd star on the Hollywood Walk of Fame, Friday, November 3, 2017 at 6:30 p.m.  The star was dedicated in the category of Recording at 1750 N. Vine Street in front of the historic Capitol Records Building.

“Since day one of Selena’s selection into the Walk of Fame, not a day went by that we were not asked by fans when Selena would get her star. This day has come and fans from around the world will rejoice in her well-deserved honor,” stated Ana Martinez, Producer of the Walk of Fame ceremonies. “The Hollywood Walk of Fame honor is the only award which fans can share with their favorite icons. Without a doubt Selena’s star will be experienced by millions of her loyal fans for years to come!”

A record was broken the night of Selena’s star ceremony. The crowd in attendance was at an astonishing 4,500 fans, surpassing the 4,000 fans that came to the star ceremony of mariachi singer, Vicente Fernandez.

Selena Quintanilla was a singer/songwriter. Her contributions to music made her one of the most celebrated Mexican-American entertainers of the late 20th century. Her music, style and influence is as current today as when she was alive - a true institution for the ages. She was named Billboard Magazine’s "Top Latin artist of the '90s", the "Best selling Latin artist of the decade" and in 2016 charted as the 2016 “Top Latin Album of the Year, Female Artist” – her legacy lives in her music and family.  While alive, Selena was regarded by the media and adoring fans as the “Tejano Madonna” for her cutting-edge look, style and dance moves.  Today, she ranks among the most influential Latin artists of all time and is credited for catapulting the Texas sound into the mainstream national market.

Born on April 16, 1971 in Lake Jackson, Texas, Selena was the youngest child of the Quintanilla family. She debuted in the music scene in 1980 as the lead of the family band “Selena y Los Dinos” with her siblings A.B. Quintanilla and Suzette Quintanilla.  Not only did Selena make record breaking music, but she broke all barriers of a male-dominated music industry. Her popularity exploded after she won the Female Vocalist of the Year in the 1986 Tejano Music Awards - a feat she would repeat nine consecutive years.  Selena began recording professionally in 1982 and in 1989 she signed with the newly-formed Los Angeles record label EMI Latin and released her first of five record setting albums. Some of her most popular songs include: Bidi, Bidi Bom Bom, Dreaming of You, No Me Queda Mas, Amor Prohibido andComo La Flor.

Aside from her significant contributions to music and culture, Selena was active across her community as she donated time and money to many local and national civic causes – a tradition that continues today through the work of The Selena Foundation. In the mid-1980s, Coca-Cola appointed her its Hispanic ambassador and spokesperson. Her community engagement and the impact of her loss was so great, that two weeks after her death, George W. Bush — then governor of Texas — declared her birthday “Selena Day” in Texas.

On March 31, 1995, Selena passed away tragically and her passing made shocking global headlines.  Her posthumous crossover album, Dreaming of You (1995), debuted atop the Billboard 200, making Selena the first Latin artist to accomplish this feat. In 1997, Warner Bros. Pictures released Selena, a film about her life and career, starring Jennifer Lopez as Selena. As of 2015, Selena has sold over 65-million albums worldwide.

On October 17, Google launched a video Doodle to celebrate Selena. The video Doodle explored the story of her life set to one of the most iconic songs: Bidi Bidi Bom Bom. The date also specifically marked the date of Selena’s first studio album release with Capitol EMI (self-titled “Selena”).  The Doodle ran in 18 countries for 24 hours starting at midnight local time( except the US, where launch began at 9 p.m. on October 16/12 EST on October 17).  Google partnered with the Quintanilla family to digitize for the first time and launch a Google Arts & Culture Exhibit on that same day.