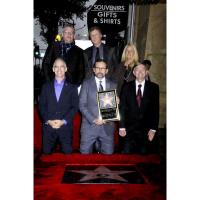 Watch us as the Hollywood Chamber honors Steve Carell exclusively on www.walkoffame.com

The Hollywood Chamber of Commerce honored actor Steve Carell with the 2,570th star on the Hollywood Walk of Fame on Wednesday, January 6, 2016. The star in the category of Motion Pictures was dedicated in front of the Egyptian Theatre at 6708 Hollywood Boulevard. “We are so excited to honor one of Hollywood’s most versatile actors who has worked in both television and motion pictures,” stated Ana Martinez, Producer of the Walk of Fame ceremonies. “Having an actor of this caliber added to the Walk of Fame adds to the mystique of Hollywood and fans from around the world are excited about this beloved actor being honored by Hollywood,” she added.

Helping Emcee and Hollywood Chamber President/CEO Leron Gubler to unveil the star were director Adam McKay and Will Ferrell.

In his latest project, Carell stars in Paramount Pictures’ “The Big Short.”Directed by Adam McKay, the film was released on December 23, 2015.

reminder you must have Valid ID with you when you pick up your order.