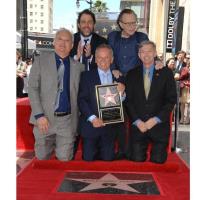 Watch as the Hollywood Chamber honors Wolfgang Puck on www.walkoffame.com

The Hollywood Chamber of Commerce honored renowned Chef Wolfgang Puck with the 2,608th star on the Hollywood Walk of Fame today, Wednesday, April 26, 2017. The star in the category of Television was dedicated at 6801 Hollywood Boulevard in front of the Hollywood & Highland Center home of the annual Oscar® telecast. Puck is the Chef for the Governors Ball following the award show.

“Wolfgang Puck is an innovative chef who successfully converged the industry of food into the comfort of entertainment,” said Ana Martinez, Producer of the Hollywood Walk of Fame. “His star will mark a staple presence hot off our world-famous Walk of Fame.”

The name Wolfgang Puck is synonymous with the best of restaurant hospitality and the ultimate in all aspects of the culinary arts. The famed chef has built a brand that encompasses three companies: Wolfgang Puck Fine Dining Group, Wolfgang Puck Catering, and Wolfgang Puck Worldwide, Inc.

Concurrently with his restaurants, product line and catering operations, Puck has made a name for himself as a television personality. His Emmy Award-winning television series, “Wolfgang Puck,” debuted on The Food Network in 2001 and aired for five seasons. He has been a regular guest on ABC’s Good Morning America since 1986, the year he also produced his first instructional cooking video, Spago Cooking with Wolfgang Puck. Puck has made guest appearances on a multitude of television shows including The Late Show with David Letterman, The Tonight Show with Jay Leno, The Late Late Show with Craig Ferguson, The Ellen De Generes Show, Entertainment Tonight, E! Entertainment Television, Hollywood Squares, Politically Incorrect with Bill Maher, Frasier, The Simpsons, The History Channel, Wheel of Fortune, Las Vegas, Shark and What’s My Line. In 2001, the A&E Network featured the life of Puck on their popular Biography series. Puck has written seven cookbooks including his latest book, “Wolfgang Puck Makes it Healthy” which debuted in spring 2014. His latest endeavor is The Rogue Experience, a new restaurant located within the experimental test kitchen of the Wolfgang Puck corporate headquarters in West Hollywood, CA. Rogue presents an intimate, and untraditional tasting menu experience for eight guests each night.

The chef is known to millions of television viewers who see him regularly on Home Shopping Network (HSN), where he demonstrates recipes using his growing line of Wolfgang Puck branded housewares.

Puck began cooking as a child, at his mother’s side. She was a chef in the Austrian town where he was born, Sankt Veit an der Glan and with her encouragement, Puck started his formal training at fourteen years of age. As a young chef, he worked in some of France’s greatest restaurants, including Maxim’s in Paris, the Hotel de Paris in Monaco, and the Michelin 2-starred L’Oustau de Baumanière in Les Baux-de-Provence, in France. At the age of 24, Puck took the advice of a friend and left Europe for the United States. His first American job was in 1973 at the restaurant La Tour in Indianapolis, where he worked for two years.

In 1975, Puck came to Los Angeles and quickly garnered the attention of the Hollywood elite as chef of Ma Maison in West Hollywood. His dynamic personality and culinary brilliance that bridged tradition and invention made Ma Maison a magnet for the rich and famous, with Puck as the star attraction. He had an innate understanding of the potential for California cuisine, and was pivotal in its rise to national attention during the late 1970s.

From Ma Maison, Wolfgang went on to create his first flagship restaurant, Spago, originally located in West Hollywood on the Sunset Strip and now on Canon Drive in Beverly Hills. From its opening day in 1982, Spago was an instant success and a culinary phenomenon. Puck and his restaurant Spago earned many accolades during its popular eighteen years in West Hollywood, including winning the prestigious James Beard Foundation Award for Outstanding Chef of the Year,   in 1991 and 1998, and the James Beard Foundation Award for Restaurant of the Year in 1994. Puck is the only chef to have won the Outstanding Chef of the Year Award multiple times.

Today Puck currently runs over 100 restaurant and café operations that span from Los Angeles and Las Vegas to New York, Singapore, London, Bahrain and beyond.  His trademark dishes, combined with his unmistakable panache and passion, have revolutionized the culinary industry.

Wolfgang Puck actively supports various cultural and charitable endeavors across the globe. For Wolfgang, it is a privilege and an honor to give back to organizations that contribute to the bettering of their local communities, and that have played a role in the success of the Wolfgang Puck brand. The acclaimed chef and his team are major supporters of the American Cancer Society, the Special Olympics, the Make-A-Wish Foundation, and the Cystic Fibrosis Society, in addition to several other non-profit organizations. In Los Angeles, his restaurants supply food to the non-profit meal redistribution group Chef’s to End Hunger, Meals on Wheels, and the Second Harvest Food Bank. In Las Vegas, the brand also helps those in need through generous support of the Governor’s Black Tie, Keep Memory Alive and the Cleveland Clinic Lou Ruvo Center for Brain Health, as well as the Animal Foundation and the Public Education Foundation.