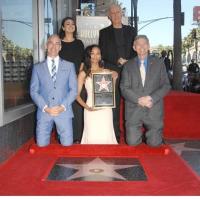 Watch us as the Hollywood Chamber honors Zoe Saldana on 5/3 exclusively on www.walkoffame.com

The Hollywood Chamber of Commerce proudly honored actress Zoe Saldana today, May 3, 2018 with the 2,637thth star on the Hollywood Walk of Fame. The star was dedicated in the category of Motion Pictures at 6920 Hollywood Boulevard in front of the Miniso store.

“Zoe Saldana is one of those actresses who captivates audiences with her performances,” said Ana Martinez, Producer of the Walk of Fame ceremonies. “She is an amazing actress and we are proud to add her name to our illustrious Hollywood Walk of Fame!”

The Hollywood Chamber of Commerce, which administers the popular star ceremonies, encourages people who are unable to attend and fans around the world to watch the event exclusively on www.walkoffame.com.

Zoe Saldana was raised in New York City and the Dominican Republic. Saldana is the epitome of a true star in Hollywood, and has built her reputation as a versatile and respected actress by choosing roles that she feels passionately about.

She will reprise her role as the fan-favorite ‘Gamora,’ in “Avengers: Infinity War,” which will open in U.S. theaters on April 27. Additionally, she can be seen in the independent drama “I Kill Giants” directed by Anders Walter based on the comic book of the same name. Saldana also recently lent her talents as the voice of Captain Celaeno in the animated Lionsgate film, “My Little Pony: The Movie.”

In 2017, she was seen opposite Chris Pratt, Vin Diesel, Bradley Cooper and Karen Gillan in Marvel Studios’ “Guardians of the Galaxy Vol. 2,” where she again starred as the franchise’s lethal alien assassin, ‘Gamora’. The movie was a blockbuster success, grossing over $380-million domestically.

In 2016, Saldana was seen in “Star Trek: Beyond,” the third installment to the 2009 blockbuster hit.  She reprised her role of ‘Lieutenant Uhura’ opposite Chris Pine and Zachary Quinto. The J.J. Abrams’ action-packed film grossed $185-million at the box office. That year she also played the role of ‘Graciela’ in Ben Affleck’s “Live by Night.”

Saldana is best known in her starring role as ‘Neytiri’ in the record-breaking film, “Avatar,”James Cameron’s sci-fi thriller, co-starring Sigourney Weaver and Sam Worthington. “Avatar” quickly became the highest grossing film of all time, winning the 2010 Golden Globe for Best Director and Best Picture. “Avatar” went on to receive a total of nine 2010 Academy Awards nominations, including Best Picture. Saldana is currently in production on the film’s highly anticipated sequels “Avatar 2, 3 and 4.”  “Avatar 2” is slated for a 2020 release.

She made her feature film debut in “Center Stage” in 2000. Saldana’s other film credits include, among others, “Infinitely Polar Bear,” “Blood Ties,” “Star Trek: Into Darkness,” “Out of the Furnace,” “The Words,” “Colombiana,” “Takers,” “Book of Life” and “Death at a Funeral.”  Saldana has also garnered accolades for her motion picture performances as leading actress including the NALIP Latino Media Awards, Imagen Awards, ALMA Awards and Saturn Awards among others.”

Furthermore, Saldana is spending time behind the camera with her film production company Cinestar. Founded with her two sisters Cisely and Mariel, Cinestar produced the NBC miniseries “Rosemary’s Baby” as well as the AOL Original series “My Hero.” She will next be seen in “The Honor List” for Cinestar in partnership with Popsugar, and Lionsgate's Studio L. The film will be released in mid-May of this year.

Additionally, Saldana teamed up with the millennial mom-geared network Awestruck to create digital content for AwesomenessTV. Formerly Saldana worked with Awestruck on both unscripted and scripted content. She executive-produce two series and create a YouTube channel for the Awestruck platform with her sisters. The lifestyle network is scheduled to debut later this year on YouTube, Facebook video and Verizon’s upcoming go90    video streaming app.

In 2011, Saldana directed the short film “Kaylien” in her ongoing effort to raise awareness about autism. The short film – which served as Saldana’s directorial debut – was a part of the Glamour Reel Moments series that brings Hollywood’s leading female talent to take a turn behind the camera, directing a short film inspired by real-life story submissions from Glamour readers. “Kaylien” starred Malin Akerman and Bradley Cooper.

When not in production, Saldana engages in philanthropic work involving children’s development, well-being and confidence building. Saldana has been very vocal in her involvement with Brave Beginnings, which focuses on bringing essential life-saving equipment and services to seriously ill children and their families.  She is also the Global Ambassador for Shot@Life, which aims to ensure that children around the world have access to life-saving vaccines.

Additionally, she also lends her support to The Step Up Network – an organization which works to propel young women from under-resourced communities to fulfill their potential by empowering them to become confident, college-bound and career-focused leaders.

In 2011, Saldana directed the short film “Kaylien” in her ongoing effort to raise awareness about autism. The short film – which served as Saldana’s directorial debut – was a part of the Glamour Reel Moments series that brings Hollywood’s leading female talent to take a turn behind the camera, directing a short film inspired by real-life story submissions from Glamour readers. “Kaylien” starred Malin Akerman and Bradley Cooper.

Saldana has also taken part in The Haiti Relief Inc which works tirelessly to provide disaster relief to Haiti after the devastating earthquake in 2010.  She has participated in development efforts with FINCA – an organization designed to alleviate poverty through lasting solutions to help build assets, create jobs and raise the standard of living. She has long been an advocate of autism awareness by engaging in organizations such as Actors For Autism, Autism Speaks and the annual event Light It Up Blue taking place on April 2nd each year.

In 2014, Saldana became the face of L’Oréal. In her role as an international spokesperson, she has appeared is several multimedia advertisements for L’Oréal and Kiehl’s.