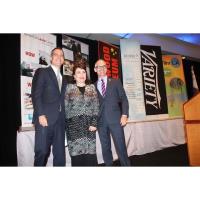 HOLLYWOOD, CA--The Hollywood Chamber of Commerce held “Breakfast with the Mayor” at the Loews Hollywood Hotel in the Hollywood Ballroom on Wednesday, June 15, 2016. This sold out event marked the first address by Mayor Eric Garcetti to the Hollywood community since taking Mayor’s office in 2013.

As Hollywood’s former Councilmember for CD-13, Mayor Garcetti is familiar with the challenges of Hollywood’s unique community and has spearheaded some great accomplishments during Hollywood’s revival. Mayor Garcetti used this breakfast to discuss his economic development strategy, Neighborhood Integrity Initiative, housing, homelessness, linkage fees, transportation and more. Attending guests also had the unique opportunity to participate in a Q&A session afterwards.

Eric Garcetti is the 42nd Mayor of Los Angeles. His “back to basics” agenda is focused on job creation and solving everyday problems for L.A. residents. Garcetti was elected four times by his peers to serve as President of the Los Angeles City Council from 2006 to 2012. From 2001 until taking office as Mayor, he served as the Councilmember representing the 13th District which includes Hollywood, Echo Park, Silver Lake, and Atwater Village — all of which were dramatically revitalized under Garcetti’s leadership.