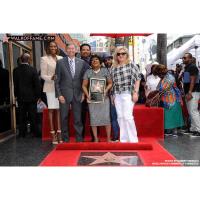 The Hollywood Chamber of Commerce proudly honored gospel singer Shirley Caesar with the 2,583rd star on the Hollywood Walk of Fame on Tuesday, June 28, 2016 at 11:30 a.m. PDT. The star in the category of Recording was dedicated at 6126 Hollywood Boulevard in front of The Fonda Theatre and is near the stars of gospel singers BeBe and CeCe Winans.

Helping Emcee and Hollywood Chamber President/CEO Leron Gubler to unveil the star were world-renowned artists Yolanda Adams and Kirk Franklin. “We are proud to welcome the Reigning Queen of Gospel Shirley Caesar to our famous Walk of Fame. She is known as a musical trailblazer who has influenced a wide range of artists across genres. Her career has made an indelible mark on American music and the sounds of gospel,” stated Leron Gubler, Hollywood Chamber of Commerce President and CEO.

In celebrating her 50th anniversary as a solo recording artist and a career that spans over 60 years as one of the most recognized names and voices, the Reigning Queen of Gospel Shirley Caesar stands tall and committed to her journey as a humanitarian, entrepreneur and internationally-renowned gospel singer, songwriter, author and pastor. With more than 40 recorded albums to date, 11 GRAMMY® Awards, 14 Stellar Awards, 18 Dove Awards, and induction into the Gospel Music Hall of Fame, Shirley Caesar is enjoying the results of the labor. Her famed hits include: “No Charge,” “Hold My Mule,” “Jesus I Love Calling Your Name,” “I Remember Mama,” “He’s Working It Out For You.” Her new album “Fill This House” includes songs such as “It’s Alright, It’s Ok” (featuring Anthony Hamilton), and “Mother Emanuel,” and was released by the label Light Records/Entertainment One on June 3, 2016.

The Durham, North Carolina native began her career recording at the age of 13 as “Baby Shirley.” When gospel legend and leader of the Caravans Albertina Walker became aware of the electrifying singer and performer as a college student, and asked her to join, Caesar halted her studies to perform with the Chicago-based group for eight years.

Caesar officially went solo in 1966 and became a legendary mainstay when her gospel version of the number one country hit “No Charge” crossed over to the R&B and pop charts in 1975.

She has performed for numerous world leaders including every U.S. President since Jimmy Carter and Nelson Mandela, and performed on Broadway, film and TV. Beyond her musical ministry, Caesar has remained deeply committed in serving the Durham and Raleigh, North Carolina communities, as pastor of Mt. Calvary Word of Faith Church in Raleigh, North Carolina for over 20 years. She has been offering community assistance to those in need through her Shirley Caesar Outreach Ministries for over 40 years, and served on the Durham City Council for four years between 1987-1991.

According to new state mandates we are able to stay open. We are limiting access to ONE shopper at a time. To avoid the lines come in the MORNING, mornings are much slower
If our gate is closed please be patient & wait until someone exits before entering.  Please practice 6′ spacing between each other for healthy social distancing while shopping or waiting in line.

We are not accepting cash, card payment only.

We are so grateful for all of you Stay safe #mickeysplants

If you are open, in full or part, and require TEMPORARY SIGNAGE
(altered hours, altered services, takeout vs.sit-down seating, etc.)
or need EMBROIDERED UNIFORMS, LAB COATS or SCRUBS for temporary, relief or new staff, we are here for you.

We will offer both our temporary sign and embroidery services

for companies serving our community during this crisis.Hollywood Signs & Branding

Crateful started delivering your ready-to-eat meals,
vacuum-sealed to keep for the whole week!

Every meal is made with immune-boosting ingredients, full of nutrients, healthy for the whole family.

Our team is happy to provide you delicious food while you stay home safe!

Reminder you must have Valid ID with you when you pick up your order.