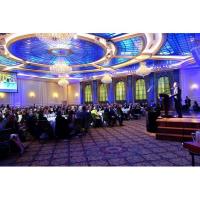 Having completed his two full years representing the 13th Council District, Councilman Mitch O’Farrell had a lot to report at his third State of Hollywood address on Thursday, January 28th at Taglyan Cultural Complex.

Councilman O'Farrell addressed a sold out audience which included city officials, representatives, business and community leaders. His main topic for the day was vision.

“About vision, Franklin D. Roosevelt said, ‘Keep your eyes on the stars and your feet on the ground.’ There is no better metaphor for Hollywood. We should think big, dream big, and always imagine what is possible, never letting conventional thinking get in the way of our creativity - while being grounded in the knowledge that we have the ability and an obligation to reach our full potential here in Hollywood. Without the vision of the individuals, agencies, and businesses in this room, we would not be where we are today. Hollywood is the most special neighborhood in the world. It’s vision that brought us to this point, and it will take vision - and follow-through to make sure our momentum continues."

O’Farrell has built a solid reputation as a councilman who understands the importance of maintaining a healthy business climate. He led the fight to be sure that the City Council considered business impacts before voting to raise the minimum wage. Recently, he was the first councilman to go on the record opposing the proposed no-growth initiative now being circulated.

"The so-called “neighborhood integrity initiative,” is a direct threat to the Los Angeles economy, including our ability to produce badly needed affordable housing. If successful, it could jeopardize expansion plans for Children’s Hospital, Kaiser Permanente on Sunset, Hollywood Presbyterian Hospital, Paramount Pictures, and many of our approved and pending multi-housing projects, including hundreds of units of affordable housing. The ballot initiative calls for a moratorium on general plan amendments in the future and a moratorium on the construction of previously approved projects.

The Hollywood Central Park could be at risk and the future of many other projects not only in Hollywood, but also across the city would be brought into question. It’s unclear what the implications are for LAX, the master plan for Union Station, Warner Center in the San Fernando Valley, the creation of new parkland along the Los Angeles River, port development at San Pedro, and the expansion of light rail lines anywhere in the city. This would have a devastating impact on our goal to bring investment to many of our struggling neighborhoods in South LA, the North San Fernando Valley, Westlake, and Boyle Heights."

O'Farrell added that there could be a profound hit to city revenues resulting in cutbacks for basic city services, such as fire, police, street resurfacing, trash collection, graffiti removal, street lighting, and building and safety inspectors.

"And our efforts to host the 2024 Olympics will be brought into question. A two-year moratorium may have a direct effect on the handful of new Olympic venues that need to be constructed. If the moratorium passes this year, extending into 2019, one can only imagine the backlog of projects, not to mention the backlog of pending environmental impact reviews that the city would now be responsible for conducting, but would not possibly have the resources to complete - because the city budget would be devastated by the severe decline in collected revenues, and the city would be hamstrung in our ability to hire. And you better believe that a rash of appeals and lawsuits would be at the ready once projects eventually become entitled again, only causing more delay and uncertainty, well into the decade of the 2020s.

Just as the great recession fades into history (and there are already signs of a slowing economy), everything comes to a halt, costing jobs, and again, putting the squeeze on the production of badly needed housing - the number one crises facing this city.

Make no mistake about it. This is our time in Los Angeles. This is our era, to take that leap into world-class status. The unprecedented growth and investment we are experiencing is resulting in a built environment that is reshaping the look of Los Angeles - for the better. Those of us who have been here all our lives, or for decades know what i am talking about. Los Angeles has long been a city in need of a good, quality urban fabric. Schlocky stucco boxes and surface parking lots are giving way to well-designed spaces that make us proud. We are cultivating a higher standard of architecture in conjunction with historic preservation, and we must have the resolve not to allow anything to stop us in our tracks."

The Councilman’s district is the most diverse in the City, including the neighborhoods of Atwater Village, East Hollywood, Echo Park, Elysian Valley, Glassell Park, Historic Filipinotown, Hollywood, Mid-Wilshire/Koreatown, Rampart Village and Silver Lake.

He understands the importance of Hollywood, its history, and its brand as a unique one-of-a-kind destination place for the rest of the world, said Chamber President Leron Gubler, who noted that “He is working to enhance Hollywood’s reputation as a world-class neighborhood in which to live, do business and visit. He promotes that it is an economic driver for the rest of L.A. as the entertainment capital of the world and a worldwide destination for tourists.”

Elected to the Council in 2013, he was appointed to serve as Chair of the Arts, Parks, and Los Angeles River Committee; Vice-Chair of Health, Mental Health and Education Committee, and a member of the Energy & Environment; Entertainment & Facilities; Public Safety, and Public Works and Gang Reduction Committees. In addition, he is a member of the Ad Hoc Committee on the 2024 Summer Olympics.